Should Christians pay a tithe? 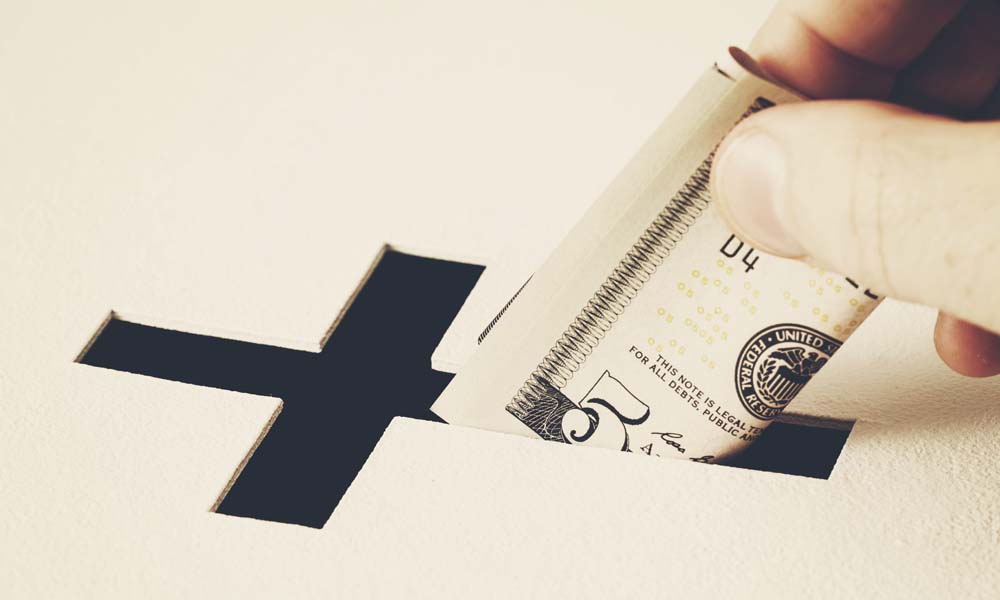 Recently, a member asked me a question: Should Christians pay a tithe? Is it not an Old Testament, Old Covenant practice? Are we not in the New Covenant of grace? What does Grace Communion International (GCI) teach about tithing? Another member complained to me about how in the 1970s and 1980s they were “forced” to pay 10 percent of their gross Salary as a tithe. That means your tithe was based on your income before tax and any deductions. The word tithe means 10th or 10 percent.

Tithing was an Old Testament financial model to look after Levites, who were the priests that ministered in the temple and supervised the worship practices of the people of Israel. When the tribes of Israel were allocated land in the Promised Land so that they could grow crops for themselves, and raise cattle and sheep, the Levites were not allocated any land. Instead, God said, “I give to the Levites as their inheritance the tithes that the Israelites present as an offering to the Lord.” (Numbers 18:24 NIV). The Levites were not expected to work the land and keep cattle, but were instead expected to live on the tithes that the other tribes of Israel paid to God. If everyone paid their tithes faithfully, the Levites would end up with 20% more than all the produce of Israel, enough for the Levites, and for God’s work.

When the Levitical priesthood ended, the law of tithing ended with it. “For when the priesthood is changed, the law must be changed also” (Hebrews 7:12). It is important to mention that tithes were not like a tax. They were not demanded and collected by the tithe police. People paid tithes voluntarily whenever they had a harvest of their produce, which could be every day, every week, or every few months at harvest season. For most of us who have jobs today, this would be weekly, fortnightly or monthly, depending on how often our salaries are paid.

Although the law changed with the Levitical priesthood, tithing as a practice has not become a heretical practice. For example, circumcision was also part of the Old Covenant, and has become obsolete with the New Covenant. However, circumcision is not an abomination as a practice. Many people today still practice circumcision for health reasons, but not for religious reasons. Today, many churches continue to practice tithing for the financial health of their churches, not spiritual health. Good tithers are not necessarily more spiritual. Neither are non-tithers more spiritual. Good, spiritual giving is generous, and from the heart. Tithing can be generous and from the heart, and therefore spiritual. On the other hand, tithing can be an outward show, or an obligation done under compulsion, which does not reflect the spiritual health of the tither. God loves cheerful givers, not compulsive givers.

God promised to bless the people of Israel who paid their tithes. He challenged the people to test him. “Test me in this, … and see if I will not throw open the floodgates of heaven and pour out so much blessing that there will not be room enough to store it. I will prevent pests from devouring your crop…” (Malachi 3:10-11). God wanted the hearts of his people to be on him and his worship. For where you treasure is, there your heart will be. (Matt. 6:21). So, should Christians pay a tithe? The short answer is: Tithing is an Old Covenant practice which was meant to support the Levites and Temple worship.

What does Jesus say?

If tithing is an Old Covenant practice, how are the pastors in the New Covenant church to be supported? How is God’s work to be funded? What has replaced tithing? The New Testament does not explicitly teach about giving ten percent of one’s income. However, the principle of supporting those that work full-time in ministry, like the tithing system did for Levites, is clearly and emphatically taught by the New Testament, and by Jesus himself. So, what does Jesus say about supporting those who preach the gospel and look after his flock?

Jesus was concerned that there would not be many people wanting to work full-time for the gospel because there is no money in working for the church. As we see in the book of Malachi, many people were not paying their tithes, and were robbing God.

Knowing this problem of people not paying their dues, Jesus said: “…The harvest is plentiful, but the workers are few. Ask the Lord of the harvest, therefore, to send out workers into his harvest field” (Luke 10:2). I think Jesus was deliberately playing with the imagery of tithing in this verse, when he spoke about plentiful harvest, but few workers (no tithes).

Knowing that people are not faithful in their giving, Jesus then told the disciples not to work for their living, but to expect to be supported by the people they preach to. “Go! I am sending you out like lambs among wolves. Do not take a purse or bag or sandals…Stay there, eating and drinking whatever they give you, for the worker deserves his wages. Do not move around from house to house.” (Luke 10:3-4,7). Jesus instructed his disciples to expect to be provided for by the people they preach to. They must not move from house to house begging for food. The people in the church must look after them. The people who have accepted the gospel will look after those who preach the gospel, said Jesus.

Paul goes on to say that there must be a material benefit to those who preach the gospel. “If we have sown spiritual seed among you, is it too much if we reap a material harvest from you?… Don’t you know that those who serve in the temple get their food from the temple, and that those who serve at the altar share in what is offered on the altar? IN THE SAME WAY, the Lord has commanded that those who preach the gospel should receive their living from the gospel. (1 Corinthians. 9:11, 13-14 NIV emphasis mine). Paul directly borrows from the tithing system to explain how the church is supposed to be supported, and goes on to say that Jesus commanded this.

So what is the conclusion then? It is clear that although the Old Covenant Levitical priesthood has changed, God still wants workers for the gospel, and he wants them to be supported, just as the Levites were supported. The Levites were supported through tithes. If the tithes became obsolete with the Levitical priesthood, how should those who work for the new covenant church be supported then? Paul seems to point the Corinthians to the tithing model without specifying how much they should give.

How much should Christians give?

Paul gives us an answer: “Remember this: Whoever sows sparingly will also reap sparingly, and whoever sows generously will also reap generously. Each of you should give what you have decided in your heart to give, not reluctantly or under compulsion, for God loves a cheerful giver.” (2 Corinthians 9:6-7). Giving offerings to the church to support the church and its ministries is a biblical command from Jesus himself. He has placed the burden of financing the gospel in the hearts and pockets of those who receive the gospel.

Paul does not prescribe a percentage, but he is clear that God does not want people to struggle financially because they gave to the church. “Whatever you give is acceptable if you give it eagerly. And give according to what you have, not what you don’t have. Of course, I don’t mean your giving should make life easy for others and hard for yourselves. I only mean that there should be some equality.” (2 Corinthians 8:12-13 NLT). This is similar to our progressive tax system, where those who earn more pay higher taxes than those who earn less. For example, in tax, a person who earns R100 000 per annum pays 18% tax, whilst a person who earns R1 577 301 per annum pays 35%. Yet, the person who pays 35% still lives a more affluent life than the one who pays 18%. That is the model that Paul is advocating to the Corinthians. Those who earn good incomes must pay more than 10%, whilst those who earn little must pay less than 10% as they are able.

The principle of generosity remains the driver of giving. He reminds the Corinthians not to give sparingly. He tells them if they give sparingly, they will reap sparingly. He encourages them to give abundantly, probably more than 10% that was required by the Old Covenant tithing system. The gift of God in Jesus cannot be measured in percentages. It requires 100% commitment, as Jesus himself taught.

When Paul talks about reaping, does he mean that those who give can expect to be blessed by God?

YES! He says “… God is able to bless you abundantly, so that in all things at all times, having all that you need, you will abound in every good work…. He who supplies seed to the sower and bread for food will also supply and increase your store of seed and will enlarge the harvest of your righteousness. You will be enriched in every way so that you can be generous on every occasion, and through us your generosity will result in thanksgiving to God.” (2 Corinthians 9:8,10-11).

Christians are not required to pay a tithe to the church. However, they are expected, in fact they are commanded by Jesus, to give generously to the church so that the pastors and the church ministries can be looked after. They must do this willingly, not out of compulsion, but out of gratitude for what God has done for them in Jesus Christ. Jesus commended a widow who gave 100% of what she had, whilst the rich were giving bigger amounts out of their riches, but much smaller percentages compared to the widow. (Luke 21:1-4). As indicated above, there is no expectation for anyone to give such that they are left suffering.

So, how much is generous then? Ten percent? Twenty percent? Fifty percent? You have probably heard of billionaires who give 50% of their wealth. That’s not very generous. They can afford that easily and continue to live as billionaires. The percentage is written by the Holy Spirit in your heart. “Each of you should give what you have decided in your heart to give…” (2 Corinthians 9:7). It is between you and God. The church will not police you and demand an offering from you. However, I will be failing in my duty if I did not tell you that Jesus commands that you give generously to support his church (1 Corinthians 9:14).

“Give, and it will be given to you. A good measure, pressed down, shaken together and running over, will be poured into your lap. For with the measure you use, it will be measured to you.” (Luke 6:38)

May you reap according to how you sow! Amen!

Articles in the February 2021 issue