The Boy at the Temple 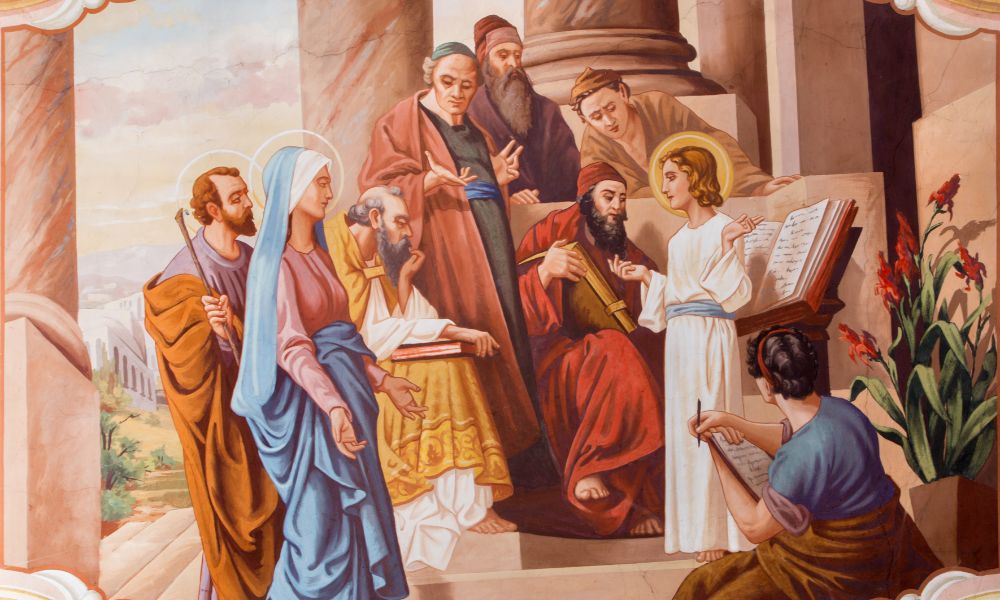 And Jesus increased in wisdom and stature, and in favour with God and man.
Luke 2:52 (KJV)

Luke’s inspired passage here tells of the only incident that God has given us of Jesus in boyhood. Luke’s treatment of Jesus’ precocious youth echoes that of historians such as Josephus and Cyrus with other subjects: the treatment isn’t unusual. And Jesus here is, indeed, precocious. But Luke also stresses here that he was human, in this very human story.

Mary and Joseph have observed the annual pilgrimage to Jerusalem at Passover (v.41). Expense and distance precluded most Jews from making the trip, but those that did travelled together. Jesus is among them, a boy of 12, a year under the official age of Israelite adulthood. Culturally, travel to this pilgrimage was in caravans, giving increased protection from robbers (Josephus recorded that whole towns sometimes travelled together!). This is a story of dust, smell, noise, movement, and lots of humans!

Mary and Joseph then travel back to Nazareth, unaware Jesus has stayed behind. Children were often looked after communally within the caravan, and with younger children to watch, Mary and Joseph would easily miss an older boy who had an element of freedom. They realise he’s missing after a day’s travel, and after fruitlessly searching relatives and friends, they return to Jerusalem.

Jerusalem’s population may have been 70,000-80,000. It took three days to find him! He was in the temple courts with teachers of the law: the Hebrew ‘Torah’ (meaning ‘teaching’ or ‘guidance’, not just ‘regulations’). The boy of 12 is listening, understanding, questioning, and astonishing those who hear and see him.

Mary asks Jesus why he has caused her and Joseph sorrow, using ‘Son’ meaning ‘child’ to address him and also ‘thy father’ – a reference to Joseph never used again (v.48). All parents know that bittersweet feeling when a child is no longer a child. Jesus asks why his parents didn’t know he must be about his Father’s business (v.50), and they don’t understand him, but ‘his mother treasured all these things in her heart’ (v.51 NIV).

Then Luke underlines Jesus’ humanness: after teaching his parents of his unique relationship with his heavenly Father, Jesus goes to Nazareth with them and is obedient to them. The Son of God – our Saviour – honours human parents and a law commandment. Even though conscious of who he really is, and only 12 years old, he shows respect to his earthly parents; and ‘…Jesus increased in wisdom and stature, and in favour with God and man.’ (v.52).

Luke’s passage stresses both Jesus’ conscious awareness that he is the Son of God, and his humanness. This gives us confidence in Jesus’ deity, and helps us understand how wide, long, high and deep his love for us is (Ephesians 3:18).

Later, on that cross, the human grown-up boy felt all that human pain… for all humans.

Prayer
Heavenly Father, thank you for the life and example of your Son Jesus, and his sacrifice for us all. In his name, Amen.

Articles in the November 2021 issue